Adam and Dr. Drew open the show discussing the panic porn phenomenon that has been unfolding as of late. They then go on to explore narcissism and how it has manifested itself in various leaders as they react to the Covid-19 pandemic. They then go on to discuss the interesting work of French diplomat Alexis de Tocqueville and his work studying America. Drew then brings up a recent tweet by their mutual friend Mark Geragos who suggests that a new bike lane installed in front of one of his restaurants thus cutting off curbside service may have been retribution for a lawsuit he filed against Mayor Garcetti. 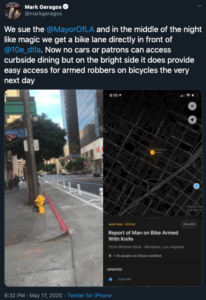